Freshairguide.com is supported by you. As an Amazon Associate reviewer, we earn commissions for qualified purchases – paid by amazon only, not you. Learn more.

For a long time, I’ve been looking for a top-notch air purifier for a large living space for some time. More often than not, I’ve been faced with units that don’t do such an excellent job cleaning the air as the manufacturer declares.

However, I’ve had excellent experience with other Levoit air purifiers. So when I heard that the company is offering a model for large spaces, I’ve decided to get one and make a Levoit LV-H134 Review.

The air purifier attracted me with its variety of smart options, quiet operation and excellent design.

It seemed to be a perfect fit for my large basement. In fact, the 710 square feet coverage promised by the manufacturer could be suitable for my office space as well.

Now that it has arrived, let’s take a closer look at this Levoit model to find out if it’s as good as the manufacturer claims it to be.

The first thing I do for any review is look for a HEPA filter. If the purifier doesn’t have such a filter, I usually consider other options. Thankfully, this one does. In fact, it only has one filter, which packs a bunch of excellent properties.

The filter inside this air purifier has a tubular shape. The reason hides in the design. This unit is designed to offer 360-degree air intake, which makes it highly efficient. In order to provide excellent filtration, the filter is designed to cater to this type of intake.

The tubular filter has three functions:

This 3-in-1 filter needs to be replaced every 6 to 8 months depending on the environment you use it in. In highly polluted conditions, it may not last more than 6 months. However, for regular households, it can work for 8 or 9 months easily.

I plugged the air purifier in and left it in my 450 square feet living room for about 45 minutes. When I came back, the difference was amazing. The air felt truly clean, and considering I was making seafood pizza in the morning – I’m very impressed. It’s quite a feat to remove strong seafood odors.

The replacement process takes 5 seconds. I loved how easy it was to take the old filter out and put the new one in. Let’s be honest, and this is a personal preference, but I really appreciate the fact that I don’t have to wash any pre-filters, which is a usual thing for the majority of air purifiers. With Levoit LV-H134, there is no washing, cleaning or dusting. You simply replace the filter and voila!

The filter, just as the air purifier itself, isn’t cheap. It will cost you about $65. However, since in reality, you are buying three filters, the price can be considered more than reasonable.

Now that we know that the Levoit LV-H134 has a top-notch filtration system, let’s go on to its design. I’m a big fan of the tower design. I believe air purifiers with the 360-degree air intake do a better job than regular units do. Added to that, Levoit have received many accolades for the fantastic design of the LV-Pur131

So when I took this one out of the box and saw its sleek tower design, I was more than impressed. Even though the air purifier is rather tall (32 inches), it looks spectacular. I tried placing it both in the corner of the room and near the coffee table. Whilst it is imposing, the design is very cool and was a welcome addition to my living room décor.

This air purifier is rather heavy. It weighs about 27 pounds. So you won’t be carrying it around the house, but thankfully, it has small wheels on the bottom so moving it around the room is easy. It would work well as a basement air purifier, but due to the weight, it might be difficult to carry up the basement stairs. So you might want to check our guide on large air purifiers suitable for basement work for better options.

The LV-H134 has an excellent LED display on top. The panel is intuitive so you don’t even have to read the manual to learn how to operate the unit. However, I would still recommend anyone to open that little brochure. It has a lot of useful information inside.

Overall, the design gets five stars from me. Of course, I would prefer the unit to be a bit smaller. But then, it wouldn’t be able to service such a large area.

I’m a big fan of air purifiers with smart or wifi options. I think Levoit has done an excellent job in the past equipping its units with a wide variety of additional features. This model is not an exception. In fact, it has several extremely useful upgrades.

Sleep mode – this mode keeps the fan working at its lowest settings. Even though it doesn’t dim the panel, you can do it yourself by pressing a special button. Such a button is a rarity in air purifiers.

Auto mode – you don’t have to worry about switching fan speeds according to the air quality in the room. The air purifier does it for you. And it does it well.

Air quality laser sensor – I believe an air quality sensor is an integral part of any air purifier these days. This sensor monitors the air quality in the room and tells you about it so you can either regulate the fan speed manually or use the auto mode.

This air purifier displays the air quality for you in numbers. Similar models usually just have the color change from red (dirty air) to blue (clean air). The LV-H134 has the color indicators as well so you can find out about the air quality without reading the numbers.

If you decide to read the numbers, here is how to understand them:

Timer – you can set the timer for any number of hours from 1 to 12. This is a big advantage over other models, which usually offer pre-set timer intervals. You don’t have to worry about turning the air purifier on or off when you leave the house.

Overall, this air purifier has all the smart options I need. The only downside I found is the absence of remote control. After all, it’s nice to operate the air purifier without getting off my favorite armchair.

As a light sleeper, I pay the closest attention to the air purifier’s noise levels. I don’t feel comfortable falling asleep with something noisy near my bed. Since this air purifier is rather big, I was afraid that it would be loud as well. Levoit managed to surprise me one more time. The unit is almost inaudible and one of the most quiet air purifiers of this size.

This model has three fan settings:

Even though my bedroom is smaller than 500 square feet, I’ve decided to try the air purifier in it anyway. I’m very satisfied with how quiet it is. The unit didn’t interfere with my sleep even though it stood next to my bed.

To give you an idea of how quiet it is, let me tell you that 30 dB is similar to a very quiet whisper. Meanwhile, 40 dB is akin to the sound of a computer working. So if you aren’t a light sleeper, you can leave the air purifier working at its medium fan setting.

It’s a rarity for the air purifier to have such a quiet fastest fan setting. 54 dB is similar to the air conditioner working. So it doesn’t interfere with your everyday activities, such as working or watching TV.

Ok, here is my non-favorite part of any review. Because it usually shatters illusions. I’ve been reviewing air purifiers for many years, and I know that manufacturers like to paint a rosy picture of the coverage ability of their models.

I work with facts and numbers only.

By using a simple formula (CADR x 1.5), I calculate the real coverage area recommended for the unit. For this air purifier, the manufacturer claims that it can clean rooms up to 710 square meters.

My calculations tell me that this air purifier is excellent for rooms up to 470 square feet. My experience confirms it. The unit did an excellent job cleaning the air in my 450 square foot living room.

Of course, the unit could clean the room of about 700 square feet as well. However, it will take it much more time and the results will be less satisfactory.

I would like to mention that 470 square feet is a pretty large area, and the majority of homeowners I know don’t have rooms bigger than that.

So even though 710-square-feet coverage area stays a dream, I’m still happy with what the unit has to offer.

I always pay special attention to the warranty because I believe that the longer it is, the more the manufacturer trusts its unit to work. Levoit offers a one-year warranty for this model. Plus, it adds one more year if you register the purifier on the official website.

Read the warranty information carefully in order not to face any surprises along the way.

I’m very happy with the quality and power of this air purifier. It has an excellent filtration system that deals with the majority of small contaminants in the air. It’s a good choice for kitchens, living rooms, bedrooms, and office space.

The air purifier is very quiet, emitting only 32 dB at the lowest fan settings. Even though the unit is big and heavy, it has a sleek design that fits into virtually any décor. 360-degree air intake improves purifying speed and quality.

The air purifier is easy to maintain. It doesn’t require any pre-filter washing or dusting. All you have to do is take one 3-in-1 filter one and put the new one in. The process takes less than one minute.

The LV-H134 is packed with smart features, including a high-tech laser air quality sensor.

I would recommend this air purifier to anyone who is looking for crispy clean air in a large room. If you have pets, suffer from allergies or have a smoker in the household, this unit can help you deal with the annoying contaminants and breathe easier.

I hope our Levoit LV-H134 review has helped your research. We’ve reviewed a lot of large air purifiers now and have no problem in recommending this unit as one of the best around. It can rival the Coway Airmega and Fit50 from Alen and at a slightly cheaper price point too. 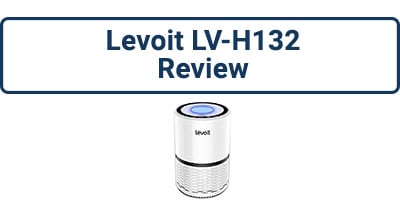 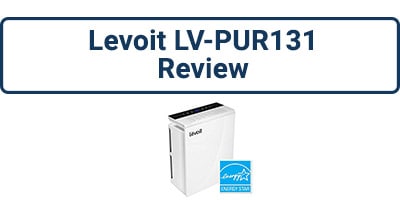 Freshairguide.com is supported by you. As an Amazon Associate reviewer, we earn small commissions for qualified purchases - paid by amazon only, not you. It helps us to continue to offer our free and unbiased reviews. Learn more.